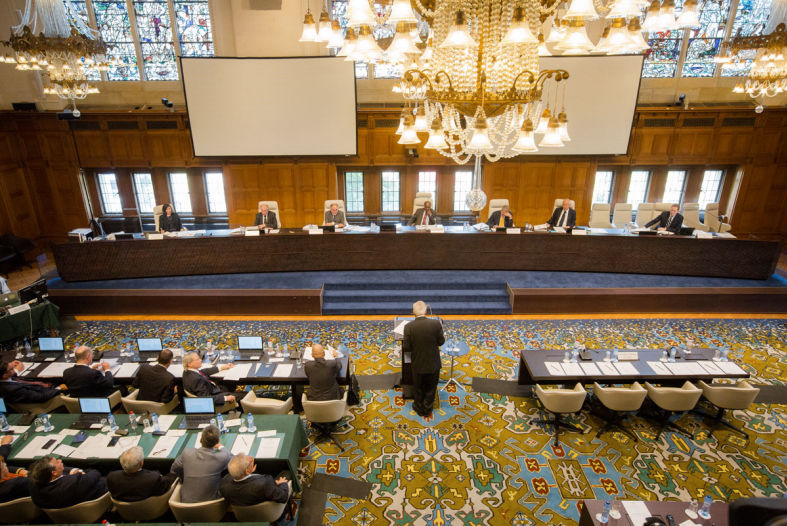 This week’s snapshot focuses on the second round of the Philippines’ request for the Hague-based Permanent Court of Arbitration (PCA) to recognize the Phillippines’ right to exploit waters in the disputed South China Sea. Last month, in a defeat for Beijing, the PCA dismissed China’s legal arguments and ruled that it has authority to hear the Philippines’ case. China’s state news agency Xinhua issued a warning that Philippine-China relations have been “sinking to a historic low.” The hearing that began on 23NOV comes as China steps up its divisive program of building airstrips and defenses on reclaimed land in the South China Sea. As well as the Philippines, Taiwan, Malaysia, Vietnam and Brunei all dispute sovereignty over the mid-ocean outcrops. The PCA expects to hand down a decision next year on several issues raised by the Philippines, including the validity of China’s sweeping territorial claims under the 1982 United Nations Convention on the Law of the Sea.

Jay Batongbacal, U.S.-ASEAN Fulbright Initiative Visiting Scholar in Washington, Associate professor at the University of the Philippines College of Law, Director of the University’s Institute for Maritime Affairs and Law of the Sea

“…the jurisdictional decision already stands to benefit other states, regardless of the case’s final outcome. China’s “nine-dash line” claim to most of the South China Sea may now be legally discussed, explained, and evaluated by the tribunal based on the cumulative uncoordinated statements and explanations of Chinese officials and academics, but without their direct participation. Internationally, this could seriously undermine China’s influence over South China Sea stakeholders; domestically, it could challenge the credibility of its leadership.”

“I hope Beijing could become more active in participating in all forums and respond to the international ruling at the tribunal.”

“The PCA’s ruling to hear the case is] a major blow for China given that the opinion explicitly rejects China’s arguments that… the Philippines has not done enough to negotiate the issues with China.”

“The merits decision will not decide which states ultimately have sovereignty over any of the disputed features, but the tribunal’s decision on the merits likely will recognize that the small reefs and islands at issue are entitled to either no or perhaps very small maritime zones.”

[He said that] having the two new jets is “a start” toward building the minimum defense stance. He said it shows China that the Philippines is “finally” taking its “external defense seriously. And in that broader calibration it will lend credence not just to the Philippines but also to the Philippines defense relations with its ally the United States and its growing relationship with other Southeast Asian countries including Vietnam.”

Kuala Lumpur, Nov 22, 2015 (AFP) – Philippine President Benigno Aquino told an Asia-Pacific summit on Sunday that “the world is watching” whether China would behave as a responsible power in the simmering standoff over maritime territory.

Aquino kept up a drumbeat of growing criticism of China’s expansion of tiny atolls into fully-fledged islands, as leaders including Chinese Premier Li Keqiang met in Malaysia.

AMSTERDAM (Reuters) – Lawyers for the Philippines will appear before a panel of international judges in The Hague on Tuesday, seeking a ruling that could bolster territorial claims by a series of countries against China in the resource-rich South China Sea.

The Philippines is asking the Permanent Court of Arbitration to recognize its right to exploit waters within 200 nautical miles of its coastline, under the terms of a U.N. convention.

China, which claims economic and territorial rights in almost the entire body of water, has boycotted the proceedings and rejects the court’s authority in the case.

China on Wednesday harshly criticized the Philippines’ case against it at an arbitration tribunal over rival claims in the South China Sea, calling the process a “political provocation.”

A day after a court in the Netherlands began hearing the case, Chinese Foreign Ministry spokesman Hong Lei repeatedly said the Philippine’s action is “unilateral” and it is not an effort to “resolve a dispute, but is an attempt to negate China’s territorial sovereignty, and maritime rights and interests.”

Manila (dpa) – Philippines defence officials cheered as the first two of 12 fighter jets purchased from South Korea touched down at an airport outside the capital Saturday.

The Philippine air force has not had fighter jets for a decade, but the government has been building up the military’s capability amid increasing tensions with Beijing over territorial disputes in the South China Sea.

Metro Manila (CNN Philippines) — The Philippine delegation to the Permanent Court of Arbitration in The Hague on Wednesday (November 25) strengthened its claims against China over a territorial dispute in the South China Sea.

Deputy Presidential Spokesperson Abigail Valte told CNN Philippines that that team focused on China’s aggressive claims in the disputed waters as the court’s Arbitral Tribunal heard the merits of the case for the second day.

International law professor Philippe Sands of University College London argued that Mischief Reef, Second Thomas Shoal, Subi Reef, Mckennan Reef and Gaven Reef are all low tide elevations under the United Nations Convention on the Law of the Sea (UNCLOS) and as such, are not entitled to its own territorial sea, exclusive economic zone or continental shelf.