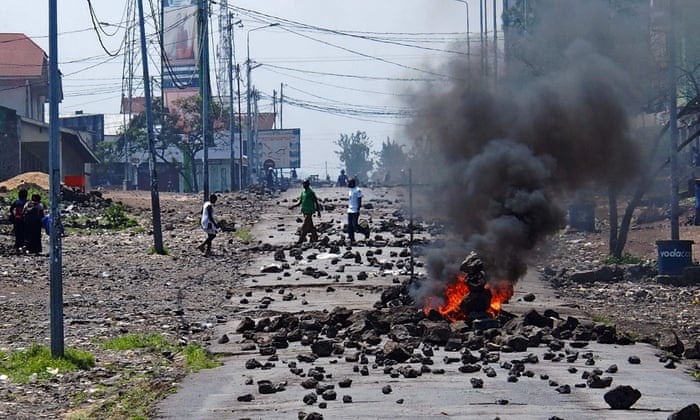 A barricade burns in Goma during a protest against President Joseph Kabila.

This week’s snapshot focuses on the ongoing political crisis in the Democratic Republic of the Congo. On 11MAY2016, the country’s supreme court ruled that President Kabila could stay in power beyond the end of his term on 19DEC2016 if elections were delayed, effectively allowing President Kabila to remain in office indefinitely. The opposition held large protests against what it called a “constitutional coup,” which were violently suppressed by the government. Foreign governments have encouraged the government to stick to the country‘s election timetable for NOV2016 elections.

[A timely ballot is now] “a largely unrealistic scenario.”

“What is happening at the national level with the elections is having an effect on the armed groups, they are increasing recruitment.”

“Cohesion in the Kabila camp has been maintained these last months. At this stage there is little-to-no pressure on him.”

“The government fears [Katumbi] because he has the potential to mobilize an electorate in different parts of the country. There is an aura of success around him.”

“Many people have significant doubts about how Katumbi amassed his fortune.”

The European Union has urged authorities in Congo to breathe new life into the electoral process so that political chaos doesn’t undermine the chances for free, fair and inclusive polls.

EU foreign ministers called Monday on authorities to draw up a new calendar for a vote currently scheduled for November and update electoral lists.

WASHINGTON — A simmering political crisis in Congo that the U.S. and its allies have been unable to defuse is stoking fears in Congress that one of Africa’s largest countries is on the verge of slipping into widespread violence.

Tension is building in Congo over President Joseph Kabila’s maneuvering to avoid national elections and remain in office beyond his constitutionally permitted term, according to U.S. officials and members of a coalition opposing Kabila.

United Nations Secretary-General Ban Ki-moon on Wednesday voiced concern about reports of rising political tension in the Democratic Republic of the Congo due to uncertainty about a presidential election scheduled to take place later this year.

The U.N. statement comes days after three Congolese activists, arrested hours before a general strike in February to demand that President Joseph Kabila leave power when his mandate expires this year, were sentenced to a year in prison.

Beni, Congo (dpa) – At least two people were killed when tens of thousands of people took to the streets in the Democratic Republic of Congo to demand that national elections be held on time, the United Nations Joint Human Rights Office (UNJHRO) said Thursday on Twitter.

At least four others were injured and 59 demonstrators were arrested as they clashed with police in different locations around the country, according to the UNJHRO.

KINSHASA, May 27 (Xinhua) — Peaceful protests organized on Thursday by various opposition groupings in the Democratic Republic of Congo (DR Congo), were rocked by ugly incidents, although they did not destabilize the population’s normal activities.

The protests were aimed at denouncing a recent ruling by the Constitutional Court which allowed President Joseph Kabila to remain in power beyond 2016, until the presidential elections are organized.