Restriction of Liberties in France After Paris Attacks 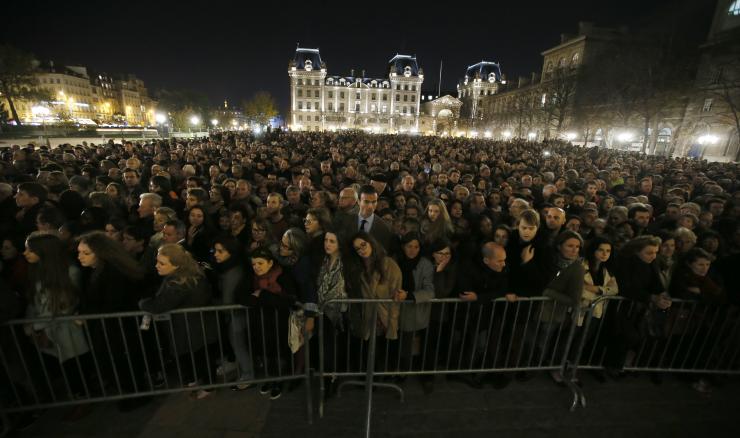 People gather outside Notre Dame Cathedral in Paris Nov. 15, 2015, when a Mass is celebrated in the wake of a series of deadly terrorist attacks. Reuters/Pascal Rossignol

This week’s snapshot focuses on the government restrictions on free speech and protests after the multiple attacks in Paris on November 13th, 2015. As part of the three-month extended state of emergency, the French government has banned protests in the country, expanded police powers, and allowed the government to block websites and social media accounts for “promoting or inciting terrorist acts”.

Bertrand Mathieu, a professor of law at the Sorbonne

“The problem in France is that there are a lot of Islamists who were suspected of illicit behavior and the police had information on them, but because they didn’t commit any specific crime, the police couldn’t arrest them. Now, if someone is so much as suspected of having ties — whether direct or indirect — to terrorists, they could be placed under house arrest.”

““What they are asking is to be able to use passwords and other information to go online and access servers, mail servers, and other data not stored on the hard drive.”

“These are measures we would never have imagined a Socialist government would have proposed.”

“Time and again we have seen emergency measures extended and codified until they become part and parcel of the ordinary law, steadily chipping away at human rights. As the days pass and law enforcement agencies in France and across the region work diligently to bring the perpetrators to justice and avert imminent threats, the need for emergency powers that depart from regular law and infringe on human rights will need to be carefully reassessed. It is a paradox to suspend human rights in order to defend them.”

“I’m concerned that France’s creeping censorship is both potentially harmful — in that it’s undemocratic and could silence other speech — and counterproductive. ISIS wants a society where only one point of view is accepted; when the state takes more power over our speech, they’re acting on the same knee-jerk impulses.”

1. Europe’s response to the Paris attacks is different this time

IN JANUARY 2015, after 17 people died in a series of incidents in Paris—including an attack on Charlie Hebdo, a satirical newspaper—Europe erupted in spontaneous demonstrations. People marched in protest against an assault on a fundamental principle of European civilisation: freedom of expression. Millions turned out for rallies across the continent, toting signs bearing the message “Je suis Charlie” in identification with those killed at the paper, which often caricatured the Prophet Muhammad. Many cautioned against letting the attacks turn public sentiment against Muslims in general, whether immigrant or native-born. In Germany the reaction of Horst Seehofer, the chairman of the CSU (the Bavarian sister party of Germany’s governing Christian Democrats), was typical. Denying any links between terrorism and immigration policies, he called on Germany’s anti-Islam Pegida movement to cancel a planned demonstration, and said he was pleased that all German parties had “refrained from deriving political capital from the attack.”

Talks between the French foreign minister, Laurent Fabius, and campaigners over the fate of a huge march before the forthcoming Paris climate summit have ended without agreement.

In the wake of attacks in Paris last Friday, the French government proposed scaling down the protest from a march on 29 November – which organisers had hoped would draw hundreds of thousands of people – to a stationary rally.

One activist source said organisers would respond flexibly to Fabius’s suggestions, but that a “kettled” rally of 5,000 people held in the Paris suburbs “would not be acceptable”.

The crucial UN climate conference, which has been in planning since 2011, will go ahead with heightened security, President François Hollande has said. But French security forces are understood to favour a blanket ban on public demonstrations around it.

The French government will be able to block websites and social media accounts for up to three months, after its legislature passed new and extended emergency powers in the wake of the Paris attacks.

The “state of emergency” law — which is valid for a maximum of 12 days unless extended by parliament — gives the government, security services, and police there a range of additional powers, including a ban on associations and public demonstrations. It also allows authorities to conduct house searches and place suspects under house arrest without judicial warrant.

It is unclear to what extent authorities will have the authority to take down social media and web posts, but will likely focus on activity deemed to be promoting terrorism or violence.

Far greater authority to carry out searches without warrants. Expansive power to place suspects under house arrest. Access to computers found in raids.

Following last week’s Paris attacks — and embracing a similar civil liberties crackdown in the United States after 9/11 — French lawmakers signed off Friday on a three-month extension to a national state of emergency. But lawmakers didn’t just approve an extension to the suspension of civil liberties and the expansion of police power. They also overhauled the 1955 law governing states of emergency, handing the French government extraordinary authority to fight back domestically against extremist threats like the Islamic State, which has claimed responsibility for the rampage that killed 130.

President François Hollande declared the national emergency immediately after the Nov. 13 attacks. It allows police to break down doors and search houses without a warrant, break up assemblies and meetings, and impose curfews. The order also clears the way for military troops to be deployed to French streets. Since then, French security teams have aggressively raided apartments and houses to round up suspects and weaponry.

5. What makes us European? Free speech, dissent and the cult of the conscience

What does it mean to be European in an age of terror? After the Paris terror attack, Charlie Hebdo ran a front cover of a man turned into a fountain by bullet holes. “They may have weapons,” it joked, “we have champagne!” Someone else drove 400 miles to play an instrumental version of “Imagine” for mourners – a song about nothing.

These are statements born of despair. Others were more affirming. Some went to Mass; there were secular vigils offering free hugs; millions draped their avatars with the tricolour. Andrew Neil gave a brilliant roar of a speech that listed the cultural achievements of France and asked Isil what it had to offer as an alternative. The flame of French defiance burns on.

But it is less clear now what it burns for. Ours is a pluralist, atomised society that typically defines itself by its liberties and rules (we drink champagne… but we don’t drink and drive) rather than underlying cultural assumptions. The latter are either taken for granted or are strangely absent. This empty, supermarket society is not attractive to migrants