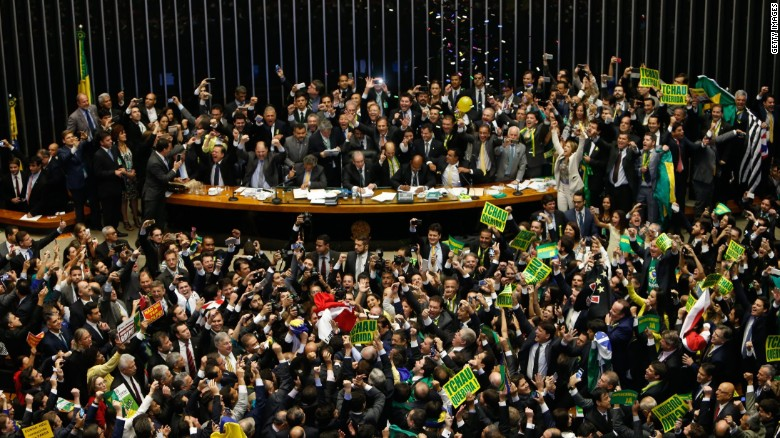 This week’s snapshot focuses on the impeachment trial of suspended Brazilian President Dilma Rousseff.  The trial began on 25AUG, and centers around charges that Rousseff manipulated the federal budget and took illegal state loans in an attempt to conceal the country’s economic problems.  Rousseff has defended herself by pointing out that other former presidents used similar accounting techniques, and she has dismissed the impeachment as a “coup” by corrupt opposition lawmakers meant to derail investigations into corruption at the state oil company. Nonetheless, Rousseff is widely expected to be convicted and impeached.  If 54 of the 81 senators vote to oust her, Michel Temer, the interim president and her former vice president, will replace Rousseff until the end of the current term in 2018.  Rousseff’s ouster would end Partido dos Trabalhadores’ (the Worker’s Party) 13-year rule. With former President Luiz Inácio Lula da Silva also mired in a corruption scandal, it is unclear how the party would recover if Rousseff is convicted.  A recent poll indicates that 51 senators are committed to voting to dismiss Rouseff; only 19 support her, and 11 are yet undecided.  The Senate will hear a total of eight witnesses, and both Rousseff and her mentor and predecessor in the presidency, Luiz Inacio Lula da Silva, are expected to testify on 29AUG.  The final vote will take place 30AUG or 31 AUG.

Sample of Third Party Validators regarding the trial

“It’s her opportunity to look her accusers in the eye…She is acting to preserve her own image. She knows she won’t come back.”

“Mr Temer’s challenge is about restoring domestic and foreign investor confidence and citizens’ trust in the government, which is a very tall order…But there is no alternative.”

“[Rousseff’s appeal on Facebook] looks like a final gesture of despair, an act of rhetoric that is likely to have little effect.”

“There is a sense of the air being cleared and a new beginning. The problems are still there, but there seems to be a political consensus that this is the way forward.”

“Impeachment is a traumatic process…The country is still split. There are those who view this entire process as something that was manipulated by Temer and his Brazilian Democratic Movement party (PMDB).”

Brasília, Aug 24, 2016 (AFP) – Brazil’s Supreme Court chief justice has rejected a request from suspended president Dilma Rousseff to annul the session at which senators voted to open an impeachmenttrial against her.

Rousseff’s lawyers had argued that some of the procedures used at the session, held August 10, violated her rights.

Brazil’s Senate on Thursday began deliberating whether to permanently remove President Dilma Rousseff from office, the final step in a leadership fight that has paralyzed Congress and cast a pall over a nation in the midst of a severe recession.

Friday’s announcement comes on the second day of the impeachment trial against Silva’s protege and successor Dilma Rousseff, who has been suspended from office since May.

These are Rousseff’s former Minister of Finance, Nelson Barbosa, and Ricardo Lodi, a law professor from the State University of Rio de Janeiro.

5. UPDATE: Supporters of Brazil’s Rousseff insist she broke no laws

Brasília, Aug 28, 2016 (AFP) – The final witnesses in the defense of suspended Brazilian president Dilma Rousseff testified late Saturday in her senate impeachment trial, days before a vote that could permanently remove her from power.

Rousseff, 68, is accused of taking illegal state loans to help bridge budget shortfalls and mask the true state of the economy during her 2014 reelection campaign.