The War for Libya: Confronting an Insurgency-Filled Vacuum Between Warring Governments 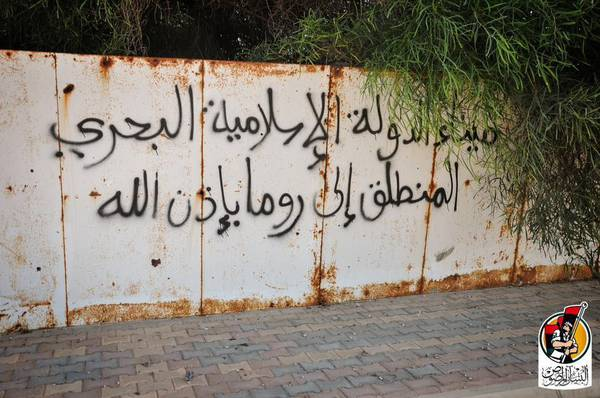 ISIS fighters scrawled on the walls of Sirte that the Libyan city was “the port of the Islamic State, the starting point for Rome… with the permission of God,” according to militias loyal to Fayez al-Sarraj’s national unity government. (ANSA)

This week’s snapshot focuses on the latest developments in Libya’s five and a half years of intense instability. The most recent shifts in the battle lines include the apparent retaking of Sirte from the IS group, which captured the city in the MAR15 battle of Sirte. On 11AUG, Western and UN-backed militias claimed to have retaken the coastal stronghold, signifying the culmination of a summer-long offensive. The militias, based in Misurata, serve under the auspices of the UN-backed Government of National Accord (GNA) headquartered in Tripoli. On 01AUG, the Pentagon announced that the United States had launched airstrikes on IS targets in Sirte in response to a request for air support from the GNA. Though world powers agreed in 16MAY to arm the GNA and Western warplanes have launched strikes against IS targets in the country for the last several months, the announcement was cause for speculation that direct Western intervention was expanding beyond discrete support. However, observers remain cautious. More than 50,000 Sirte residents will remain internally displaced until the city is cleared of remaining resistance, snipers, land mines, and booby traps. Against the backdrop of Sirte is the ongoing power struggle between post-Gaddafi political players aggressively vying for control of the oil state. The chaos created by this power vacuum has played a significant part in the formation of the IS regional foothold. Regional neighbors have expressed strong interests in a political agreement, hoping that it will benefit a coordinated campaign against the militants, many of whom are nationals from Middle Eastern and North African states.

Sample of Twitter handles tweeting about the liberation of Sirte

Sample of Third Party Validators regarding the liberation of Sirte

“It will be a mutation of strategy…It’s possible the foreign [Islamic State] fighters will disperse in the desert and try to form small groups; the Libyan component will remain in Libya and foster terrorist activities — car bombs, targeted assassinations and so forth.”

“The historical rivalry between the inhabitants of Sirte and those of Misrata makes it impossible for the latter to maintain a military presence in the city after ISIS is ousted. It is up to the GNA to find independent armed forces that can restore order and security to Sirte, guarantee the return of its citizens, and forbid the return of ISIS militants. At the moment, it doesn’t look like such a force exists.”

Andre Colling, Chief Analyst on the Middle East and North Africa at red24

“The presence of US, French, and other Western militaries, coupled with ISIS’s technological, resource, and manpower inferiority, means it is but a matter of time before the extremist group loses Sirte. It has suffered many defeats since late November, mirroring similar trends in Syria and Iraq. However, like these countries, the stability of Libya will be determined not by the defeat of the group but on the eventual unification of the forces arrayed against it.”

“Although the UN-mediated GNA received two significant breakthroughs last week; namely the oil ports deal on 31 July and beginning of US airstrikes against IS targets in Sirte on 1 August, both of these are still failing to translate into strengthened political legitimacy or unity between the opposing Libyan factions. To the contrary, the oil deal seems to be fueling tensions rather than reducing them, with conflict possible between the LNA and Jadhran’s PFG forces in Zeuitina, while US airstrikes seem to have widened the political gap between the various anti-ISIS actors even further.”

“As long as foreign intervention is on the side of the GNA, it shows Libyans that, for the U.S. and for Europeans, the fight against the Islamic State and the drive toward a unified Libyan government are the same. It can become harmful when, as in the case of French special forces fighting alongside Haftar in Benghazi, it creates the illusion for some Libyan armed groups that, as long as they claim to fight the Islamic State, they don’t need to strike a power-sharing deal to get Western support.”

ZURICH (Reuters) – Support for the U.N.-backed unity government in Libya is “crumbling” amid increased power outages and a weakening currency that is hitting crucial imports, the United Nations’ envoy to the embattled north African country told a newspaper.

The Government of National Accord (GNA) has been struggling to impose its authority on a country riven by political and armed rivalries, posing extra challenges as it tries to quash Islamic State jihadist militants.

The head of Libya’s national oil company has lashed out at the United Nations, suggesting the head of the international organisation’s mission to his country, Michael Kobler, had set a dangerous precedent by seeking a deal with one of the militias blocking Libya’s oil ports.

Mustafa Sanalla, the head of the Libyan National Oil Corporation, said the UN’s reputation had been tarnished by Kobler’s meeting with the so-called Petroleum Facilities Guard, a group that has kept the country’s ports closed for nearly three years.

3. Renzi under fire over ‘special forces in Libya’

Renzi’s centre-left government has refused to confirm or deny media reports that dozens of special forces have been deployed to help with demining and training forces loyal to Libya’s Government of National Accord, currently battling IS in its stronghold of Sirte.

Citing unnamed officers allied with the Libyan government and Western security officials, the Post said American and British personnel had been seen in Sirte several times.

5. US and allies worried by tensions near Libya’s oil terminal

PARIS (AP) — The U.S. and five European allies have expressed concerns about growing tensions near the Libyan oil terminal of al-Zueitina and are calling for rival factions to avoid damaging the country’s energy infrastructure.

In a joint statement released by the French government, France, the United States, Britain, Italy, Germany and Spain threw their support behind Libya’s UN-backed government, saying the country’s energy installations should return under government control without condition or delay.