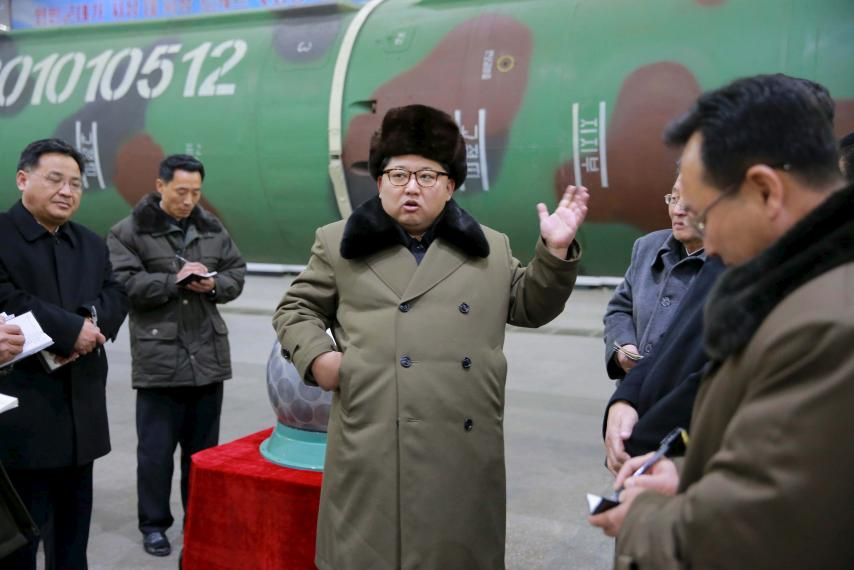 This week’s snapshot focuses on the escalation of tensions on the Korean Peninsula. After the Democratic People’s Republic of Korea conducted unannounced nuclear tests on 06JAN, the United Nations placed sanctions on North Korea on 02MAR. While China warned against sanctions, the nation is also considering new laws that would block North Korean ships docked in China from returning. China is also pursuing plans for peace talks between North Korea and United States. The United States has dismissed any plans for talks that would legitimize the North Korean government. North Korean officials have responded by upping their rhetoric, including threatening to launch a hydrogen bomb at the United States.

“Thermonuclear weapons are multistage devices, and the need to place two separate parts — the primary and secondary — would give a more oblong-like structure. As such, the device on the table is unlikely to be a thermonuclear device. It could be a boosted bomb, but that is not a hydrogen bomb by definition.”

“They don’t have a proven ICBM capability and a warhead that could survive re-entry as I understand it. So there are probably some technical difficulties there for hitting the United States. The point here is that with every test, the North Koreans are going to learn something and they’re going to make progress. And we probably should not underestimate their capability … if not today, then tomorrow.”

“South Korea and the surrounding nations are imposing the highest pressure on North Korea at the moment. Even China has stepped up its level of sanctions against North Korea compared to the past.”

“We have dismissed North Korea’s ‘bluffing’ about being able to make highly enriched uranium in the past, but it turned out to be true, so North Korea’s nuclear capability should not be underestimated.”

Jeffrey Lewis, Director, East Asia nonproliferation program at the Middlebury Institute of International Studies at Monterey
“It does not look like US devices, to be sure, but it is hard to know if aspects of the model are truly implausible or simply that North Korean nuclear weapons look different than their Soviet and American cousins. The size, however, is consistent with my expectations for North Korea.”

The North also announced it had scrapped all agreements with the South on commercial exchange projects and would “liquidate” South Korean assets left behind in its territory.

A North Korean submarine is missing and presumed sunk, according to reports in the US media.

The vessel was operating off the North Korean coast for several days when it disappeared, a paper with close links to the US military says.

North Korea threatened pre-emptive and “indiscriminate” nuclear strikes against South Korea and the United States on Monday, as the two allies kicked off their annual, large-scale military exercises.

The drills always raise tensions on the divided Korean peninsula and the situation is particularly volatile this year, given the North’s recent nuclear test and long-range rocket launch and its fury over tough UN sanctions imposed in response.

SEOUL, South Korea — North Korea fired two short-range ballistic missiles into the sea on Thursday, South Korea’s military said, a likely show of anger at continuing springtime war games by rivals Washington and Seoul and another ratcheting up of hostility on the already anxious Korean Peninsula.

The South Korean Defense Ministry says the missiles were fired from North Hwanghae Province, flew about 500 kilometers (310 miles) and fell into the water off the country’s east coast.

TOKYO (AP) — Massive joint U.S.-South Korea military exercises are a spring ritual on the Korean Peninsula guaranteed to draw a lot of threat-laced venom from Pyongyang. This time, not only are the war games the biggest ever, but the troops now massed south of the Demilitarized Zone have reportedly incorporated a new hypothetical into their training: a “beheading mission” against Kim Jong Un himself.

It’s the kind of option military planners tend to consider but almost never use. Neither the U.S. military nor South Korea’s defense ministry has actually said it is part of the Key Resolve-Foal Eagle exercises that began this week and will go on for about two months.