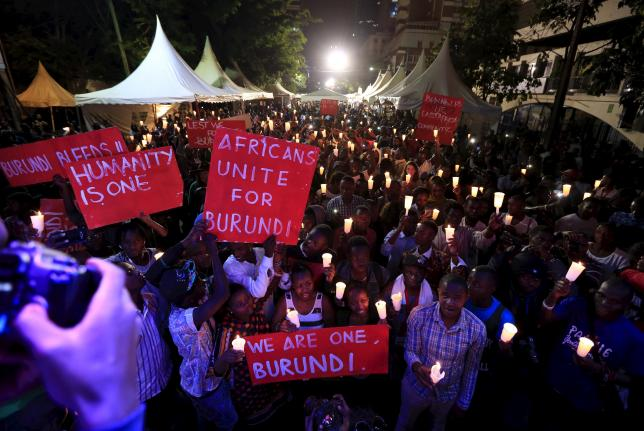 This week’s snapshot focuses on the Burundi peace talks in neighboring Tanzania, with Uganda acting as mediator.  Following President Pierre Nkurunziza’s controversial re-election in July of 2015,  Burundi has been beset by widespread unrest. As the situation intensifies, some observers have warned about the potential for outright civil war and genocide. Eager to avert such a scenario, African nations have been pressuring Burundi to accept a peace deal and international peacekeepers. However, neither the government nor the rebels appear willing to enter into serious negotiations.

News summary of events during the week of 04JAN16-10JAN16

Sample of Twitter handles tweeting about the Burundi crisis

Sample of Third Party Validators regarding the Burundi crisis

“I am not saying that tomorrow there will be a genocide in Burundi, but there is a serious risk that if we do not stop the violence, this may end with a civil war, and following such a civil war, anything is possible.”

“Would the deployment of AU peacekeepers to Burundi actually help stabilize the  situation and resolve the political crisis? Since Burundi’s government has rejected the peace operation and threatened to treat the AU mission as a foreign invasion, that seems highly unlikely, without comprehensive political dialogue taking place first.  If there is no dialogue, an outside intervention could instead stoke a full-fledged civil war between supporters of Nkurunziza on one side and his opponents and the AU force on the other.”

“The AU East African Standby Force has never fired a shot in anger. It is ill-prepared to deal with the magnitude of the situation in Burundi: it may even inflame the situation if Burundi sees this as military meddling by its neighbours.”

“It is important to note that the idea of deployment first has to be approved by the Burundian government.”

“The candidacy of President Nkurunziza was very divisive, including in the security forces.”

1. EDITORIAL: The United Nations should support the African Union’s efforts in Burundi

In a remarkable move last month, the African Union recommended the deployment of up to 5,000 peacekeeping troops to Burundi to prevent further bloodshed. The African nation has been in turmoil since President Pierre Nkurunziza decided to run for an unconstitutional third term. Almost 400 people have died, and hundreds of thousands have fled to neighboring Tanzania and Rwanda. The proposed African Prevention and Protection Mission in Burundi, called by its French acronym MAPROBU, would be deployed for six months to “contribute . . . to the protection of civilian populations under imminent threat” and if necessary, “the disarmament of militias and other illegal groups [and] the protection of political personalities.” This marks the first time the African Union has threatened to invoke Article 4(h) of its charter, giving the A.U. the right to intervene in a member state “in respect of grave circumstances, namely: war crimes, genocide and crimes against humanity.”

Unsurprisingly, Burundi’s defiant government has rejected the proposal, with Mr. Nkurunziza declaring last week that a deployment would be considered an “attack on the country” and that Burundians “will stand up and fight against them.” The A.U. has insisted that it will continue to push for Burundi to allow troop deployment.

Peace talks between Burundi’s government and opposition groups were supposed to be held Wednesday in Arusha, Tanzania, after discussions opened last month in Uganda.

But the talks were canceled, without being rescheduled — adding to the problems for a country that has been experiencing unrest since April.

3. Burundi on the Brink of Civil War as Peace Talks Collapse

Burundi is close to civil war, with genocide a real possibility, after the government refused to participate in peace talks with the opposition, according to experts.

Bujumbura (dpa) – The children seem to be everywhere in central Bujumbura – begging in parking bays, hawking plastic bags, walking the streets aimlessly and sleeping on folded cardboard boxes at night.

Many of the minors living on the streets of the Burundian capital appear to be less than 10 years old. Dressed in ragged clothes, often without shoes, they may carry even younger children on their backs.

KAMPALA, Jan. 8 (Xinhua) — African leaders are set to investigate claims by Burundi that neighboring Rwanda is supporting rebels to topple the government.

Crispus Kiyonga, the mediator of the peace talks between government and the opposition told reporters on Friday that regional leaders during their imminent summit will investigate the claims which Rwanda has denied.