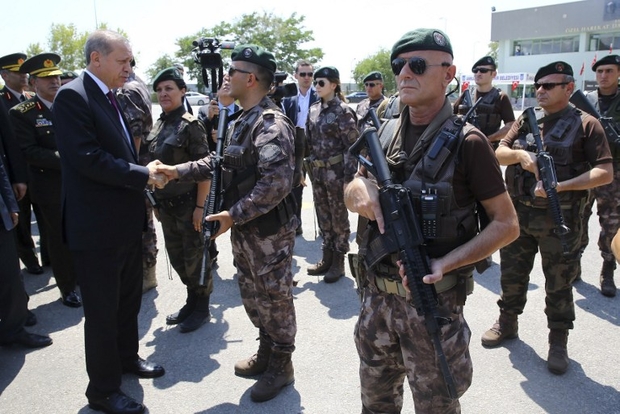 This week’s snapshot focuses on Turkey’s mass dismissal of alleged conspirators in the 15JUL failed coup d’état. The suspected ‘traitors’ have been rooted out of the judiciary, schools, media outlets, the national airline, and, most significantly, the military. The Erdoğan government’s primary suspects are Fethullah Gülen and the so-called Gülen movement, who lives in self-imposed exile in the United States.  Ankara estimates that nearly 9,000 members of the military were complicit in the attempted coup, among them nearly half of the country’s generals. The alleged conspirators have been discharged dishonorably, and many were placed under arrest. President Erdoğan’s subsequent actions have caused tensions between Turkey and it’s strategic allies, most notably putting an already controversial EU-Turkey migration deal at risk and sparking a diplomatic spat with Washington, as Ankara accuses the US of conspiring with Mr. Gulen. US General Joseph Votel, the commander of US Central Command, warned this week that the ongoing fallout could impede the US-led coalition’s progress in the fight against the Islamic State group in Iraq and Syria. President Erdoğan has dismissed this and expressed deep skepticism of the United States as ally in the wake of the failed coup.

“[The Erdoğan government] is failing to make a distinction between criminal acts and legitimate criticism…It is vital that Turkish authorities allow the media to do their work and end this draconian clampdown on freedom of expression.”

“With its main pillar, the military, broken, the Turkish state will no longer be able to check a divided society or effectively counter security threats.”

“The priority will be to make the Turkish armed forces more compliant to civilian authorities,” The most significant change will be in the military’s self-appointed role, and institutional culture, as the guardian of democracy and the republic.”

“Criticizing the government and working for media outlets that support the Gulen Movement do not constitute evidence of involvement in the failed coup.”

“Rounding up journalists and shutting down media houses is the latest assault on a media already weakened by years of government repression. Even under a state of emergency, restrictions must be necessary, proportionate and for a legitimate purpose. The provisions of the two emergency decrees passed this week fail all three of these tests and fly in the face of the government’s claim that they are upholding rights and the rule of law.”

1. Turkey Cracks Down on Journalists, Its Next Target After Crushing Coup

ISTANBUL — One journalist, who was on vacation, had his home raided in the early morning by the police. Others were called in to their bosses’ offices last week and fired, with little explanation. Dozens of reporters have had their press credentials revoked.

A pro-government newspaper, meanwhile, published a list of names and photographs of journalists suspected of treachery.

2. With Army in Disarray, a Pillar of Modern Turkey Lies Broken

ISTANBUL — As a rebel faction of Turkey’s military began a violent attempt to topple the elected government, the country’s top officer, Gen. Hulusi Akar, was held at gunpoint in his office in the capital and told for the first time about what was happening.

“Sir, the operation is starting,” a coup-plotting officer said, according to General Akar in testimony that was leaked to the Turkish news media and verified by a senior Turkish official as authentic. “We will round up people, battalions. Brigades are on their way. You will see a bit later.”

Prime Minister Binali Yildirim on Thursday convened the Supreme Military Council ahead of its regular August meeting to decide promotions and purges, confirming that almost half the country’s top brass would be immediately dismissed.

Ankara, July 29, 2016 (AFP) – President Recep Tayyip Erdogan on Friday accused a top US general of being on the side of Turkey’s coup plotters after commenting that the country’s turmoil could downgrade military cooperation with Washington.

“You are taking the side of coup plotters instead of thanking this state for defeating the coup attempt,” Erdogan said in angry remarks at a military centre in Golbasi outside Ankara, where air strikes left dozens dead during the failed putsch on July 15.

ANKARA, Turkey (Reuters) – Turkey will shut down its military academies and put the armed forces under the command of the defense minister, President Tayyip Erdogan said on Saturday in a move designed to bring the military under tighter government control after a failed coup.

The changes, some of which Erdogan said would likely be announced in the government’s official gazette by Sunday, come after more than 1,700 military personnel were dishonorably discharged this week for their role in the abortive July 15-16 putsch.