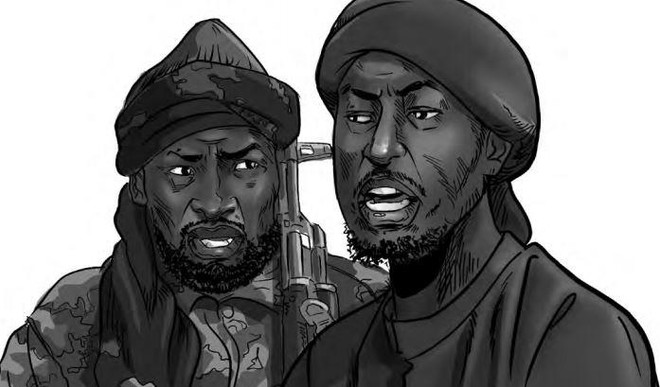 This week’s snapshot focuses on the recent developments of Boko Haram in West Africa. Abubakar Shekau, also known by the alias Darul Akeem wa Zamunda Tawheed, or Darul Tawheed, took over Boko Haram after its founder, Mohammed Yusuf, was killed in Nigerian police custody in 2009. Shekau unleashed a strategy of unbridled terror, treating Muslim villages that did not join his organization as legitimate targets. Under him, Boko Haram officially pledged allegiance to the Islamic State in MAR15.

But, in AUG16, the IS’s newspaper al-Naba published an interview with Abu Musab al-Barnawi that made no mention of Shekau. Instead, it referred to Barnawi, who is rumored to be a son of the Nigerian group’s founder, Yusuf, as the new “governor” of the West Africa Province. Shekau responded by accusing his rival, Barnawi, of apostasy and by complaining that he gained the support of Islamic State chief Abu Bakr al-Baghdadi through deception. In an implicit criticism of Boko Haram’s strategy until now, Barnawi told al-Naba that the jihadists should focus on combating Nigeria’s Christians—a target largely ignored by Shekau in recent years. On 30AUG, the commander of the fight against Boko Haram, Lucky Irabor, announced that the military will root the group out from its remaining locations within weeks. On 14SEP, Boko Haram released a new video without Shekau, lending weight to claims by the army he was gravely wounded in an air strike. Amid infighting, the terrorist group continues to cause turmoil in West Africa, killing Nigerien soldiers near the southern border and stalling negotiations over the release of the kidnapped Chibok girls.

Jibrin Ibrahim, Director, Center for Democracy and Development in Abuja

“Shekau’s approval of attacking Muslims indiscriminately led to a situation of significant loss of support within the Muslim community. The fact that he could kill Muslims praying in a mosque convinced the locals that he is not really fighting for Islam…The return to systematic attacks against Christians would be very dangerous. It could lead to a wider confessional conflict.”

“The main dispute centers on the Islamic principle of takfir, the categorization of others as non-believers. [Mr Shekau justifies his murder of Muslims on the basis that anyone refusing to engage in jihad is an apostate. Mr al-Barnawi’s lot are more prone to tolerate Muslims who choose not to fight.]”

“The personal struggle between Abubakar Shekau and Abu Musab al-Barnawi reflects in part the rivalry between Boko Haram and a splinter group, “Ansaru,” and are part of a complex, intra-Muslim conflict across the Sahel, including competition between rival al Qaeda in the Islamic Maghreb (AQIM) and the Islamic State.”

Atta Barkindo, Nigerian Insurgency Specialist and PhD candidate, The School of Oriental and African Studies at University of London

“Shekau was in control of territory and of the wealth, Barnawi won’t be able to acquire the resources that Shekau already controls — and the way these guys operate is they always go to where the resources are.”

“Before Boko Haram allied with the Islamic State, it did carry out cross-border attacks outside their core territory of north eastern Nigeria…The Islamic State model is predicated upon the capture and maintenance of territory under the motto ‘remaining and expanding,’ something Boko Haram has not been entirely successful in doing since its pledge of allegiance was accepted in March 2015…However, the apparent attempt and potential success in holding Bosso may be indicative of a renewed focus on this aspect in a new area of operations.”

Seven Niger soldiers were killed and eight others wounded in two separate attacks by Boko Haram Islamists over the past week, the army has said.

The two attacks took place in the southeastern Diffa region near the border with Nigeria, according to a military statement released late Tuesday.

ABUJA, Nigeria, Sept. 15 (UPI) — Nigeria’s defense department referred to a Boko Haram threat to kill the president as a joke not to be believed.

Brig. Gen. Rabe Abubakar, Nigerian Defense Headquarters’ acting director of defense information, reacted to a 13-minute-long Boko Haram video posted online, in which a leader of the Islamist insurgent group threatens to kill or capture President Muhammadu Buhari, by calling it a sign of weakness.

3. Behind Boko Haram’s Split: A Leader Too Radical for Islamic State

Some people can be too extreme even for Islamic State.

Nigeria opened negotiations with Boko Haram over the release of the kidnapped Chibok girls last year, but the talks were derailed due to a split in the extremist group, a minister said Friday.

Speaking at a press conference in the capital Abuja, information minister Lai Mohammed said the Department of State Services (DSS) started negotiations with the Islamists in July 2015.

DAKAR, Senegal — Two and a half years after more than 200 girls were kidnapped from a school in northeastern Nigeria, the government on Friday described for the first time the failed efforts to negotiate for their release.

Nigerian officials revealed that talks had been underway since July 2015 between the government and Boko Haram terrorists to gain the release of the girls taken from a school in Chibok. The talks began shortly after President Muhammadu Buhari took office.