In Midst of US-Cuba Détente, Havana Seeks to Make Gains in International Arena 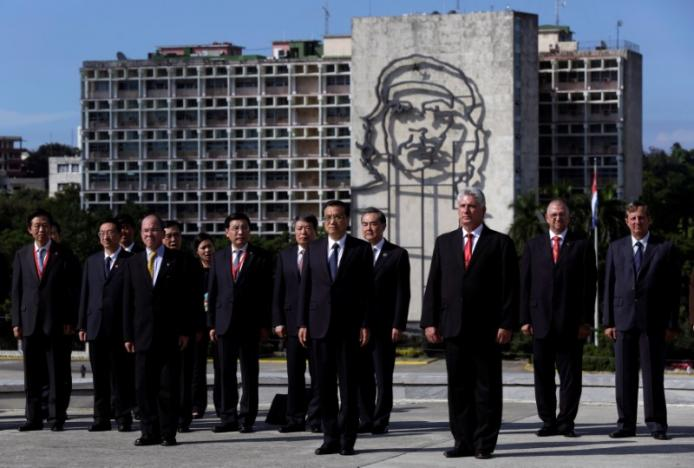 This week’s snapshot focuses on Cuba’s re-energized relations with the international community amidst the process of détente with the United States. Following President Obama and President Castro’s 17DEC14 announcements that their two countries would seek a new course of relations, the Caribbean Island nation and only communist state in the Western Hemisphere is experiencing a boost in international engagement following President Raul Castro’s initial wave of refreshed relations in his first decade in power. Since the DEC14 announcements, the Cuban government has enjoyed its removal from the United States’s ‘State Sponsors of Terrorism’ list and high-level meetings with President Obama, Pope Francis, and representatives from Germany, France, Austria, Great Britain, South Korea and Portugal, among others. Last month, Iranian President Hassan Rouhani and Japanese Prime Minister Shinzo Abe each traveled to Havana for meetings on bilateral engagement with Cuba. However, as analysts and President Obama himself have warned since the unveiling of the policy change almost two years ago, détente will be a challenging process for all parties involved.

“…three titanic, but perfectly feasible, challenges [generational handover from the revolutionaries, economic modernatization, and promotion of human capital] should point toward a new horizon, a new destiny to turn all this potential, wealth and plurality into a new inclusive, shared project that will position the country in its rightful place in the political, economic, social and cultural spheres.”

“How Japan will distinguish its economic agenda in Cuba – whether it be engagement through government-backed official development aid or private investments – from China’s is a question that will continue to bedevil Japanese policymakers. The opening of Cuba is just the next chapter in a much longer story of Sino-Japanese competition for influence in (and access to the resources of) the developing world.”

“To understand why relations between Cuba and Russia are reviving, you need to consider recent initiatives in Cuban and Russian foreign policy. Cuba’s political influence has been growing both in Latin America and throughout the developing world. From out of Moscow, meanwhile, a “Putin doctrine” has emerged. It wishes to return Russia to great power status and forge a multi-polar world that is not dominated by America…[With the US-Cuba detente,] The question is to what extent Cuba will manage to ride both horses at once in future.”

“I would say 0%. With Marco Rubio on the Senate foreign relations committee, it’s never going to happen. They have sworn to do anything they can against the normalisation of relations…The president is exercising his right to be a late lame duck president trying to do everything he can. It’s symbolic. He drove through the normalisation of relations and gets to claim he’s the one who did it.”

“[Cubans see the changes] with optimism. For a simple reason: They’ve been told that the problems in Cuba are a result of the hostility of the United States…When the President says there’s no longer any hostility, they are optimistic about the change.”

Castro and Li, in particular, coincided in their assessments of the international situation in the “animated dialogue” they held on Sunday afternoon at the home of the former leader of the communist island and head of the Cuban Revolution.

WASHINGTON — President Obama on Tuesday nominated the first United States ambassador to Cuba in more than a half-century, defying opponents of his policy of rapprochement with the government of President Raúl Castro in an effort to further cement a new relationship between the countries before he leaves office.

HAVANA, Sept. 28 (Xinhua) — Cuba said on Wednesday it will complain about continued U.S. efforts to weaken its government even as the two countries continue to normalize ties.

Delegations from both countries are to gather in Washington on Friday as part of the fourth meeting of the Cuba-U.S. Bilateral Commission, Gustavo Machin, deputy director for U.S. affairs at the CubanForeign Ministry, told reporters at a press conference.

HAVANA, Sept. 29 (Xinhua) — Cuban President Raul Castro on Thursday met with leaders of Lesotho and Namibia to boost relations and cooperation with the African nations, according to a government statement.

Castro met with Prime Minister of Lesotho Pakalitha Bethuel Mosisili at the presidential palace where they exchanged views on bilateral relations and expressed their will to strengthen ties with further cooperation in areas such as health, education and sports.

BATON ROUGE, La. (AP) — Gov. John Bel Edwards is traveling to Cuba next week for a trade mission, seeking to build economic ties with the island nation now that the U.S. is moving to normalize relations between the countries.